“March 31, 1966. I live on 103rd Street near Central Park West, one of the very few whites in a block of Negroes and Puerto Ricans. Garbage strews the streets and children play in it. Their elders view the scene with sullen passivity. Getting drunk seems to be their only retort. The subway strike and the blackout before it seemed not to affect their lives, both being manifestations of a foreign life in a society in which they are kept alien. When I saw the ad in The Village Voice that told of the Peace Parade down Fifth Avenue on March 26, I had been watching several men and women in windows opposite my building going through an elaborate system of signals, all directed to a window next to mine. One, a man I’d noticed often before, wearing a dirty white trench coat and limping, I had put down as a runner of sorts. Another, a janitor with a carrying voice, still young and dressed always in army fatigues, carries on as the neighborhood pimp. All would appear as Hollywood spies but for their apathetic demeanor. I wondered what Vietnam meant, if anything, to these victims of the Great Society. I turned on the radio to get the weather and had to wade through a report on the War on Poverty, a bulletin telling us that narcotics addiction threatened our way of life, then came the voice of a hero of my youth, Louis Armstrong, singing about Schaefer’s beer, a premature estimation that 10,000 to 12,000 were marching in the Peace Parade that wasn’t to start for at least an hour and a half. Then I got it: it was 43 degrees and windy with partially sunny skies. I was slightly hungover from a $20 evening listening to Sonny Stitt and Roy Eldridge, both of whom had thrilled me in the late forties and early fifties when we were all young. I would go to the parade to see what youth was up to now. I dressed warmly, left my apartment to pick my way through the debris of Friday night’s brawls, and entered the park. The sun was filtering through a hazy sky, and wind blew dirt into my eyes. The pond is idyllic from a distance, but up close its water is green with slime and dotted with broken buggies, beer cans, unidentified junk.  … ”
Voice 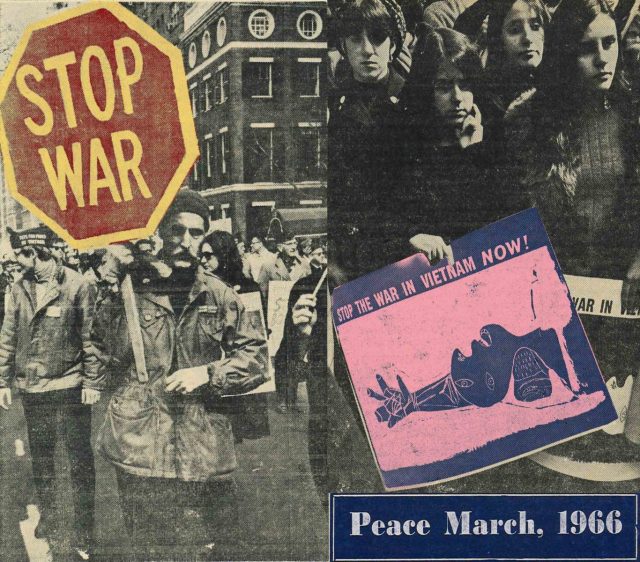