“Maintaining his debonair hipster flair for knocking the corners off the squares, Sly Stone finessed into shape with Sly & The Family Stone a series of albums that stand as the first original syntheses of Soul and pop and Rock and R&B. Although parts of their second album ‘Dance To The Music’ were recorded at the same time as their debut “A Whole New Thing” LP, it displayed a far more defined direction for Sly & The Family Stone, seeing them leaving behind many of their previous Soul/R&B conventions while exhibiting wholesale absorption of new sounds and aspects taken from psychedelic pop and acid rock. The bass and electric guitars of Larry Graham and Sly’s brother Freddie were given more prominence and pushed through with colossal amounts of fuzztone. Drummer Gregg Errico pounded out beats, off-beats and snare rolls boisterously strident and always to the best use. Sly’s sister Rose joined full-time on vocals and keyboards while Cynthia Robinson and Jerry Martini on trumpet and saxophone melded together into a single, two-ply reeds-person and one of the fullest two-piece brass sections ever. And directing it all was Sly Stone: on vocals, electric keyboards and writing, produced and arranging everything. No longer a DJ, session player or staff producer and songwriter for others, he now had the freedom to channel his musicality into a creation that was his from the ground floor up and he had it all in place AND in the pocket. … It all began with a dialogue Sly had with Epic Records’ David Kapralik, who suggested that the reason behind the marginal sales of ‘A Whole New Thing’ lay in its complex arrangements and that a larger acceptance of his music lay in writing simpler, pop songs. This provoked Sly with retaliating with writing ‘Dance To The Music.’ It was so simple, that if it were a person instead of a song it would be cross-eyed, drooling and propping up a doorway. It WAS ridiculously simple, but it was also so catchy that it became their first Top 10 pop single. The sum total of the lyrics only the song title and a series of band introductions, after which each musician supplied a short solo or riff. If that wasn’t enough, Sly went even further by re-writing an entire MEDLEY based on ‘Dance To The Music.’ …”
Head Heritage
W – Dance to the Music (Sly and the Family Stone album)
Discogs (Video)
YouTube: Dance to the Music (Live), Dance to the music (Live) 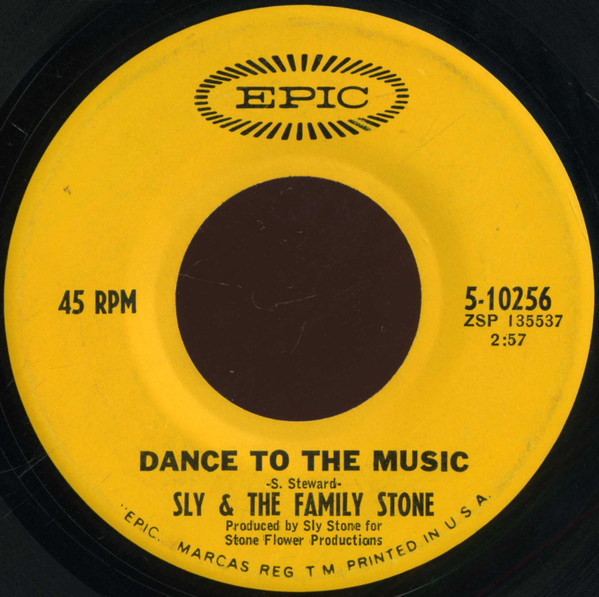