Another Side of Kerouac: The Dharma Bum as Sports Nut

“Almost all his life Jack Kerouac had a hobby that even close friends and fellow Beats like Allen Ginsberg and William S. Burroughs never knew about. He obsessively played a fantasy baseball game of his own invention, charting the exploits of made-up players like Wino Love, Warby Pepper, Heinie Twiett, Phegus Cody and Zagg Parker, who toiled on imaginary teams named either for cars (the Pittsburgh Plymouths and New York Chevvies, for example) or for colors (the Boston Grays and Cincinnati Blacks). He collected their stats, analyzed their performances and, as a teenager, when he played most ardently, wrote about them in homemade newsletters and broadsides. He even covered financial news and imaginary contract disputes. During those same teenage years, he also ran a fantasy horse-racing circuit, complete with illustrated tout sheets and racing reports. He created imaginary owners, imaginary jockeys, imaginary track conditions. All these ‘publications,’ some typed, some handwritten and often pasted into old-fashioned composition notebooks, are now part of the Jack Kerouac Archive at the Berg Collection of the New York Public Library. The curator, Isaac Gewirtz, has just written a 75-page book about them, ‘Kerouac at Bat: Fantasy Sports and the King of the Beats,’ to be published next week by the library and available, at least for now, only in its gift shop. … Among other things, Mr. Gewirtz has learned that Kerouac played an early version of the baseball game in his backyard in Lowell, Mass., hitting a marble with a nail, or possibly a toothpick, and noting where it landed. By 1946, when Kerouac was 24, he had devised a set of cards with precise verbal descriptions of various outcomes (‘slow roller to ss,’ for example), depending on the skill levels of the pitcher and batter. The game could be played using cards alone, but Mr. Gewirtz thinks that more often Kerouac determined the result of a pitch by tossing some sort of projectile at a diagramed chart on the wall. In 1956 he switched to a new set of cards, which used hieroglyphic symbols instead of descriptions. Carefully preserved inside plastic folders at the library, they now look as mysterious as runes. …”
NY Times
NY Times: ‘Kerouac at Bat’
Open Culture: Jack Kerouac Was a Secret, Obsessive Fan of Fantasy Baseball
NYPL – Kerouac at Bat: Fantasy Sports and the King of the Beats 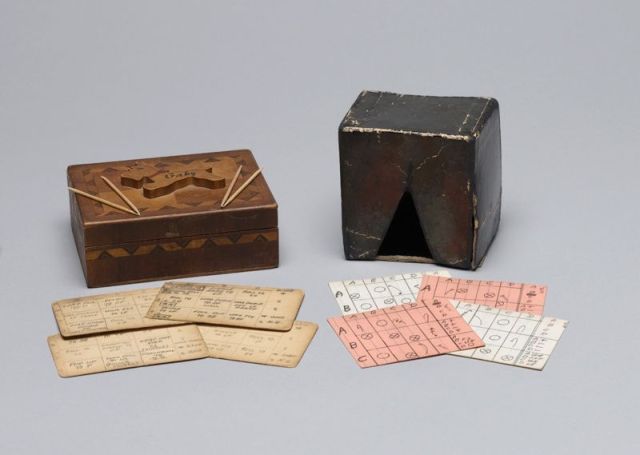