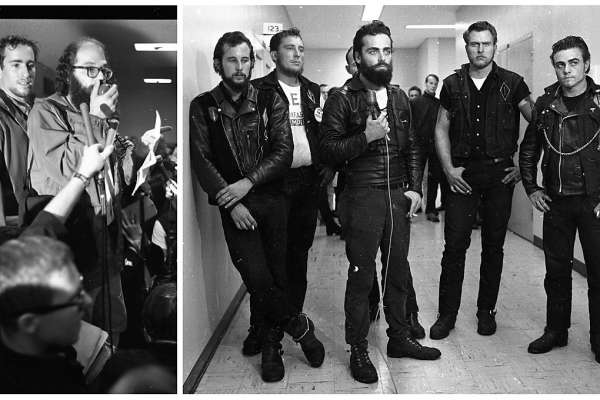 “It would be an understatement to say the Hells Angels and Beat Generation poet Allen Ginsberg had differing world views. In the Vietnam War era, those views came into conflict in the Bay Area. A recent trip to The Chronicle’s basement archive turned up a pack of negatives labeled ‘Hells Angels Debate.’ It’s likely that no one had looked through these negatives in decades, and upon closer inspection Ginsberg appeared in the batch. It was obvious this was a moment from the past that required retelling. The story begins Oct. 16, 1965, in Berkeley as a Vietnam Day Committee protest march approached the Oakland-Berkeley border. Sixteen Hells Angels broke through a police line and attacked the anti-war demonstrators. Soon, about 250 police officers were trying to break up the brawl. Six Angels were arrested, and one police officer suffered a broken leg. It was bedlam. Members of the Hells Angels were quoted as yelling ‘America first’ and ‘America for Americans’ as they surged through the police lines. According to San Francisco Examiner reporter William O’Brien, ‘The bewildered marchers appeared uniformly grateful for police protection.’ With another large anti-war march planned for the East Bay a month later, on Nov. 20, members of the Vietnam Day Committee — a collection of students, left-wing political groups and labor unions — met with motorcycle club representatives in the cafeteria at what was then San Jose State College. About 1,000 students crammed into the space, curious about what sort of ‘discussion’ would take place. Ginsberg and anti-war activist Jerry Rubin were at the meeting representing the committee, while the main speaker for the bikers was a Hells Angel Sacramento chapter leader named Louis. There to support him were members of the Gypsy Jokers and Night Riders clubs, who used the names Scotty, Indian and Hutch. Ginsberg got things started by ringing a tiny Buddhist bell and chanting, ‘To protect everybody from evil.’ He then addressed the bikers, ‘We have fears the Angels will attack us on our march, and we wonder: Why?’ … The bearded poet responded that he was sure ‘you don’t want the blood of pacifists and old ladies on your hands.’ Rubin suggested the bikers volunteer for the armed services, and when asked what the anti-war marchers would do if attacked during the march, he responded, ‘If we’re attacked, all we’re going to do is bleed.’ …”
San Francisco Chronicle