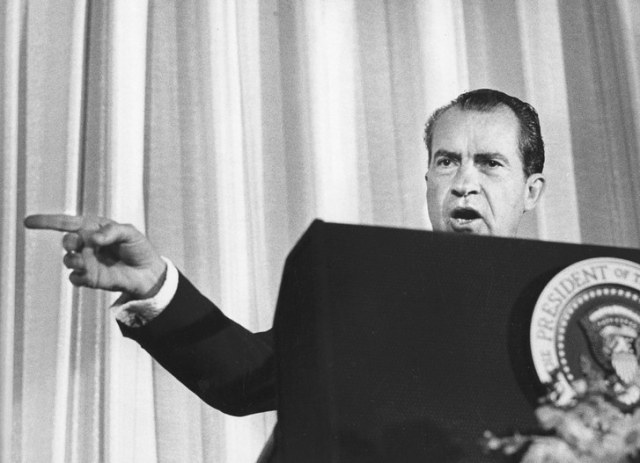 “The Nixon Doctrine, also known as the Guam Doctrine, was put forth during a press conference in Guam on July 25, 1969 by President of the United States Richard Nixon and later formalized in his speech on Vietnamization of the Vietnam War on November 3, 1969. … This doctrine meant that each ally nation was in charge of its own security in general, but the United States would act as a nuclear umbrella when requested. The Doctrine argued for the pursuit of peace through a partnership with American allies. At the time of President Nixon’s first inauguration in January 1969, the US had been engaged in combat in Vietnam for almost four years. The war had so far killed over 30,000 Americans and several hundred thousand Vietnamese citizens. … During a stopover during an international tour on the U.S. Territory of Guam, Nixon formally announced the Doctrine. Nixon declared the United States would honor all of its treaty commitments in Asia, but ‘as far as the problems of international security are concerned … the United States is going to encourage and has a right to expect that this problem will increasingly be handled by, and the responsibility for it taken by, the Asian nations themselves’. Later, from the Oval Office in an address to the nation on the War in Vietnam on November 3, 1969, Nixon said: First, the United States will keep all of its treaty commitments. Second, we shall provide a shield if a nuclear power threatens the freedom of a nation allied with us or of a nation whose survival we consider vital to our security. Third, in cases involving other types of aggression, we shall furnish military and economic assistance when requested in accordance with our treaty commitments. But we shall look to the nation directly threatened to assume the primary responsibility of providing the manpower for its defense. The Doctrine was exemplified by the Vietnamization process regarding South Vietnam and the Vietnam War. … The doctrine was an explicit rejection of the practice that sent 500,000 American soldiers to Vietnam, even though there was no treaty obligation to that country. A major long-term goal was to reduce the tension between the United States and the Soviet Union and mainland China, so as to better enable the policy of détente to work. …”
Wikipedia
NY Times: The Nixon Doctrine (Feb. 19, 1970)
Soundcloud: The Nixon Doctrine at 50 (Audio)