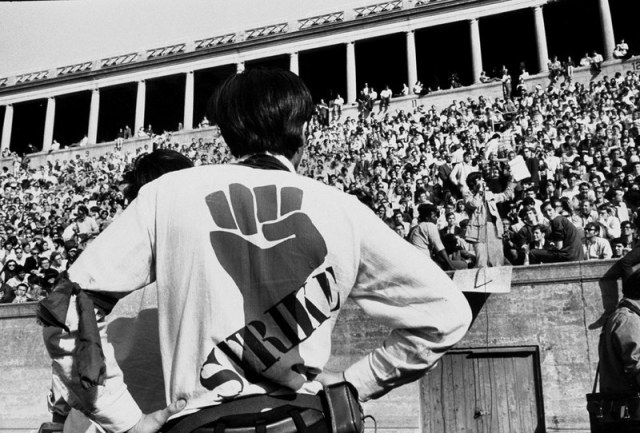 Harvard Strike – Over the span of two weeks in April of 1969, Harvard students who were diametrically opposed to the Vietnam War and its Reserve Officers’ Training Corps presence on campus kicked up a string of demonstrations.

“Student protest encompasses a wide range of activities that indicate student dissatisfaction with a given political or academics issue and mobilization to communicate this dissatisfaction to the authorities (university or civil or both) and society in general and hopefully remedy the problem. Protest forms include but are not limited to: sit-ins, occupations of university offices or buildings, strikes etc. More extreme forms include suicide such as the case of Jan Palach‘s and Jan Zajíc‘s protests against the end of the Prague Spring and Kostas Georgakis‘ protest against the Greek military junta of 1967–1974. A common tactic of student protest is to go on strike (sometimes called a boycott of classes), which occurs when students enrolled at a teaching institution such as a school, college or university refuse to go to class. It is meant to resemble strike action by organized labour. The purpose of these strikes is often to put pressure on the governing body of the university, particularly in countries where education is free, and the government cannot afford to have a student cohort miss an entire year. This can cause an overload of students in one academic term and the absence of an entire class in the following term. In the West, student strikes date to the early days of universities in the Middle Ages, with one of the earliest and most significant being the University of Paris strike of 1229, which lasted two years and yielded significant concessions. In more recent times, significant walkouts occurred in the late 1960s and early 1970s: the French May 1968 events began as a series of student strikes. The largest student strike/boycott in American history occurred in May and June 1970, in the aftermath of the American invasion of Cambodia and the killings of student protesters at Kent State University in Ohio. An estimated four million students at more than 450 universities, colleges and high schools participated in the Student Strike of 1970.  The term ‘student strike’ has been criticized as inaccurate by some unions and commentators in the news media. These groups have indicated that they believe the term boycott is more accurate.”
Wikipedia
TIME: The Revolution on America’s Campuses
Vanity Fair: A Visual History of Campus Protests by Emily Jane Fox
Campus Protesters Aren’t Reliving the 1960s
The Activist Students of 1960s East Los Angeles