“Mary Quant has often been credited with ‘inventing’ the miniskirt – the most era-defining look of the 1960s. In reality, the introduction of ‘above the knee’ skirts was a gradual process. Contemporary photographs and surviving dresses show that it took until 1966 for skirts to become really short. Quant herself has acknowledged how the trend for rising hemlines was influenced by an emerging London street style, and a wider cultural shift towards informality and the break-down of social codes. ‘Above the knee’ skirts developed in tandem with rock and roll and other youth dance crazes from the late 1950s. Very early signs of the mini could also be detected in late-1950s couture. Balenciaga’s ‘sack dress’, for example, introduced a simple, semi-fitted shape which took the emphasis away from the wearer’s waist, while Yves Saint Laurent’s 1959 Trapeze line for Dior promised to show more leg, or even some knee. The elite Paris couturier André Courrèges achieved international publicity for a couture collection featuring short skirts in April 1964. Away from the rarified world of Parisian couture houses however, it was young women like Quant, and schoolgirls on the streets, who were improvising short skirts. The same year that Courrèges showed shorter skirts on the catwalk, Quant’s collections included girlish and pretty styles such as this lace dress, with a hemline that touched the knee, made for the cheaper ‘Mary Quant’s Ginger Group’ label, launched in 1963. Our collection includes a version of this dress bought by Jenny Fenwick in Sheffield, who remembers, ‘Mary Quant epitomised a style which was different to the norm and meant that teenage girls like me, didn’t have to look like their mothers’.  …”
V&A
Mary Quant’s miniskirt: a symbol of confidence
History of the Miniskirt: 60s Hedonism & Youth Rebellion
W – Mary Quant, W – André Courrèges, W – Twiggy 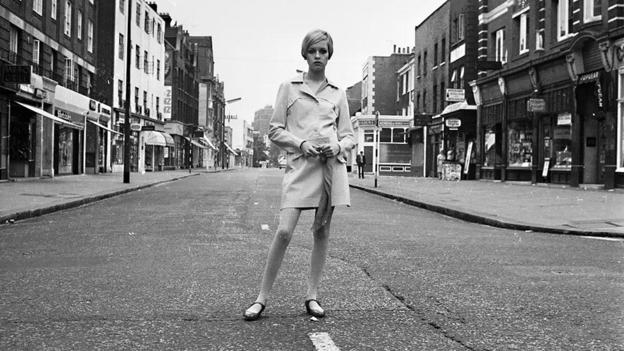