“When I first got to Saigon as a journalist, in 1963, I took it for granted that American policy to counter Communist expansion into the southern part of Vietnam was the right thing to do. That was the conventional wisdom from experience in Europe, where the Soviet Union had established satellite countries on its border. My journalistic perspective in the beginning was ‘normal.’ A good American point of view. As I learned more about the complexities of the war, my journalism became more accurate. The war’s defenders might have said I was becoming more critical, even biased. But in fact I was becoming more objective — I set aside the pro-American, anti-Communist filter I brought with me to Vietnam and reported what I saw. In the news and documentary reports I did, I showed that despite all the destruction, suffering and cost, the war was being lost. Now I’d say it shouldn’t have started. My experience, and that of many, even most, American journalists in the Vietnam War transformed our profession. We realized over the years that the government was ill-informed and even wrong about issues of life and death. As a result of that, reporters today are doing a better job because they know about the evolution of that deception and what its effects have been on American society. When I realized that nothing was working out the way the United States wanted, I began doing TV programs that showed how bad the situation was. Sometimes people in the New York office said, this can’t be right because of what we’re hearing from the White House. I was the bad-news messenger. But I could see that the body-count war was being lost. It wasn’t possible to kill your way to victory in Vietnam as in World War II. History, culture, the evolution of the Communist Party under Ho Chi Minh — things were different from the situation in Europe. That breaking point in the ‘body count’ that President Lyndon Johnson wanted, and that Gen. William Westmoreland assured him was close, was a fiction, because those in charge in Hanoi adjusted the level of fighting to suit them, and their young men kept coming because they knew what they were fighting for.  …”
NY Times
NY Times: In Her Own Words, Photographing the Vietnam War
The film: ‘Cathy At War’ (Video) 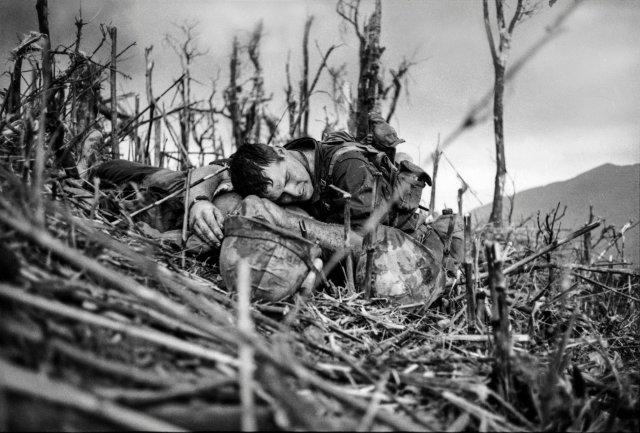 Vernon Wike, a Navy corpsman, with a dying comrade at the Battle of Hill 881, near Khe Sanh, South Vietnam, in 1967.