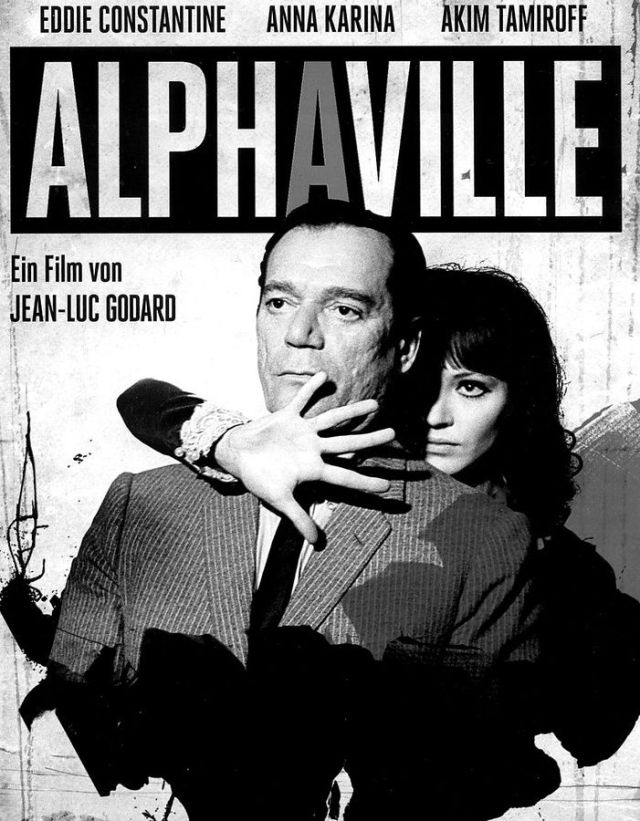 “Alphaville: une étrange aventure de Lemmy Caution (Alphaville: A Strange Adventure of Lemmy Caution) is a 1965 French New Wave science fiction noir film directed by Jean-Luc Godard. It stars Eddie Constantine, Anna Karina, Howard Vernon and Akim Tamiroff. The film won the Golden Bear award of the 15th Berlin International Film Festival in 1965.  Alphaville combines the genres of dystopian science fiction and film noir. There are no special props or futuristic sets; instead, the film was shot in real locations in Paris, the night-time streets of the capital becoming the streets of Alphaville, while modernist glass and concrete buildings (that in 1965 were new and strange architectural designs) represent the city’s interiors. The film is set in the future but the characters also refer to twentieth-century events; for example, the hero describes himself as a Guadalcanal veteran. Expatriate American actor Eddie Constantine plays Lemmy Caution, a trenchcoat-wearing secret agent. Constantine had already played this or similar roles in dozens of previous films; the character was originally created by British pulp novelist Peter Cheyney. However, in Alphaville, director Jean-Luc Godard moves Caution away from his usual twentieth-century setting and places him in a futuristic sci-fi dystopia, the technocratic dictatorship of Alphaville. Alphaville is not based on any Cheyney story. Lemmy Caution is a secret agent with the code number of 003 from ‘the Outlands’. Entering Alphaville in his Ford Mustang, called a Ford Galaxie, he poses as a journalist named Ivan Johnson and claims to work for the Figaro–Pravda. He wears a tan overcoat that stores various items such as an M1911A1 Colt Commander semi-automatic pistol. He carries a cheap Agfa Rapid 35 camera (new in 1965) with him and photographs everything he sees, particularly the things that would ordinarily be unimportant to a journalist. Caution is, in fact, on a series of missions. First, he searches for the missing agent Henri Dickson (Akim Tamiroff); second, he is to capture or kill the creator of Alphaville, Professor von Braun (Howard Vernon); lastly, he aims to destroy Alphaville and its dictatorial computer, Alpha 60. Alpha 60 is a sentient computer system created by von Braun, which is in complete control of all of Alphaville. …”
Wikipedia
Guardian – My favourite film: Alphaville
Jean-Luc Godard’s dystopian sci-fi noir classic “Alphaville” was “science fiction without special effects” (Video)
NY Times – Screen: ‘Alphaville,’ Festival Picture, at the Paris:Godard’s Film Spoiled by Shifting Its Gears (Oct. 26, 1965)
YouTube: Alphaville – Trailer