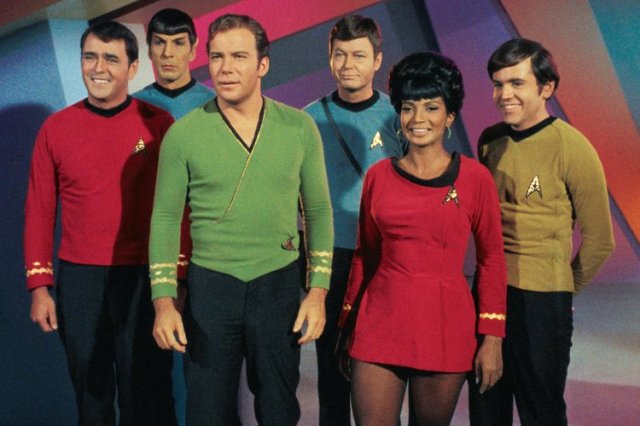 “Star Trek is an American science fiction television series created by Gene Roddenberry that follows the adventures of the starship USS Enterprise (NCC-1701) and its crew. It later acquired the retronym of Star Trek: The Original Series (TOS) to distinguish the show within the media franchise that it began. The show is set in the Milky Way galaxy, roughly during the 2260s. The ship and crew are led by Captain James T. Kirk (William Shatner), First Officer and Science Officer Spock (Leonard Nimoy), and Chief Medical Officer Leonard McCoy (DeForest Kelley). Shatner’s voice-over introduction during each episode’s opening credits stated the starship’s purpose: Space: the final frontier. These are the voyages of the starship Enterprise. Its five-year mission: to explore strange new worlds, to seek out new life and new civilizations, to boldly go where no man has gone before. … Star Trek aired on NBC from September 8, 1966, to June 3, 1969, and was actually seen first on September 6, 1966, on Canada’s CTV network. Star Trek‘s Nielsen ratings while on NBC were low, and the network canceled it after three seasons and 79 episodes. Several years later, the series became a bona fide hit in broadcast syndication, remaining so throughout the 1970s, achieving cult classic status and a developing influence on popular culture. Star Trek eventually spawned a franchise, consisting of six television series, thirteen feature films, numerous books, games, and toys, and is now widely considered one of the most popular and influential television series of all time. … The costume designer for Star Trek, Bill Theiss, created the striking look of the Starfleet uniforms for the Enterprise, the costumes for female guest stars, and for various aliens, including the Klingons, Vulcans, Romulans, Tellarites, Andorians, and Gideonites among others. … The three main characters were Kirk, Spock, and McCoy, with writers often playing the different personalities off each other: Kirk was passionate and often aggressive, but with a sly sense of humor; Spock was coolly logical; and McCoy was sardonic, emotional, and illogical, but always compassionate. In many stories the three clashed, with Kirk forced to make a tough decision while Spock advocated the logical but sometimes callous path and McCoy (or ‘Bones’, as Kirk nicknamed him) insisted on doing whatever would cause the least harm. McCoy and Spock had a sparring relationship that masked their true affection and respect for each other, and their constant arguments became popular with viewers. …”
Wikipedia
W – List of Star Trek: The Original Series episodes
W – USS Enterprise (NCC-1701)
The 20 Best Episodes of ‘Star Trek: The Original Series’ (Video)
amazon
YouTube: Star Trek: The Original Series – First Episode Opening (The Man Trap) 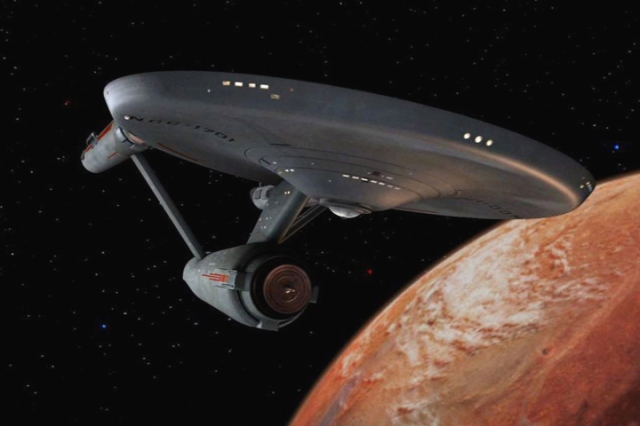 The Starship Enterprise flies over an orange planet in ‘The Man Trap,’ the premiere episode of ‘Star Trek,’ which aired on September 8, 1966.