“Closely Watched Trains (Czech: Ostře sledované vlaky) is a 1966 Czechoslovak film directed by Jiří Menzel and is one of the best-known products of the Czechoslovak New Wave. It was released in the United Kingdom as Closely Observed Trains. It is a coming-of-age story about a young man working at a train station in German-occupied Czechoslovakia during World War II. The film is based on a 1965 novel by Bohumil Hrabal. It was produced by Barrandov Studios and filmed on location in Central Bohemia. Released outside Czechoslovakia during 1967, it won the Best Foreign Language Oscar at the 40th Academy Awards in 1968. The young Miloš Hrma, who speaks with misplaced pride of his family of misfits and malingerers, is engaged as a newly trained station guard in a small railway station during the Second World War and the German occupation of Czechoslovakia. He admires himself in his new uniform, and looks forward, like his prematurely retired railwayman father, to avoiding real work. The sometimes pompous stationmaster is an enthusiastic pigeon-breeder with a kind wife, but is envious of the train dispatcher Hubička’s success with women. Miloš holds an as-yet platonic love for the pretty, young conductor Máša. The experienced Hubička presses for details of their relationship and realizes that Miloš is still a virgin. The idyll of the railway station is periodically disturbed by the arrival of the councillor, Zednicek, a Nazi collaborator, who spouts propaganda at the staff without success. … During the nightshift, Hubička flirts with the young telegraphist, Zdenička, and imprints her thighs and buttocks with the office’s rubber stamps. Her mother sees the stamps and complains to Hubička’s superiors, and the ensuing scandal helps to frustrate the stationmaster’s ambition of being promoted to inspector. The Germans and their collaborators are on edge, since their trains are being attacked by the partisans. A glamorous Resistance agent (a circus artist in peacetime), code-named Viktoria Freie, delivers a time bomb to Hubička for use in blowing up a large ammunition train. At Hubička’s request, the ‘experienced’ Viktoria also helps Miloš to resolve his sexual problem. … Now Hubička and the other railwaymen are indeed laughing — to express their joy at the blow to the Nazi occupiers — and it is left to a wistful Máša to pick up Miloš’s uniform cap, hurled across the station by the power of the blast. …”
Wikipedia
Criterion
Guardian – Jiri Menzel: Closely Observed Trains
senses of cinema
YouTube: Trailer, Opening Scene (Eng Subs) 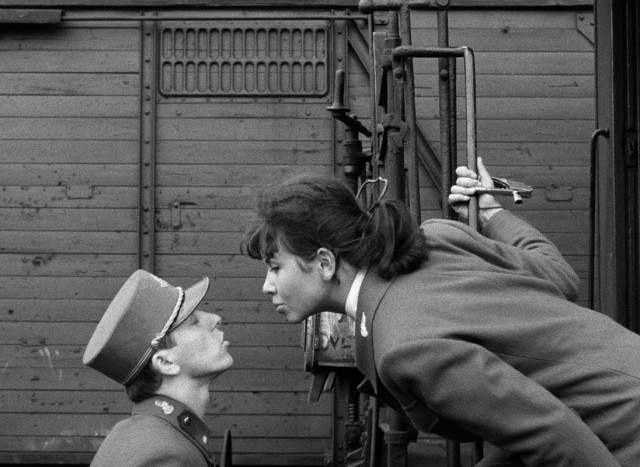