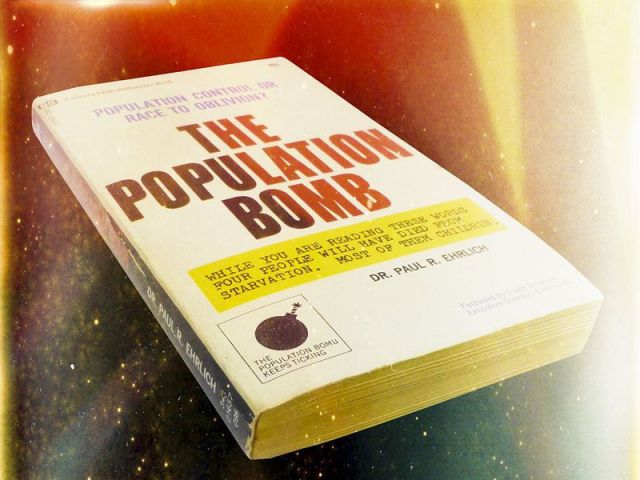 “The Population Bomb is a best-selling book written by Stanford University Professor Paul R. Ehrlich and his wife, Anne Ehrlich (who was uncredited), in 1968. It predicted worldwide famine in the 1970s and 1980s due to overpopulation, as well as other major societal upheavals, and advocated immediate action to limit population growth. Fears of a “population explosion” were widespread in the 1950s and 1960s, but the book and its author brought the idea to an even wider audience. The book has been criticized since its publishing for its alarmist tone, and in recent decades for its inaccurate predictions. The Ehrlichs stand by the basic ideas in the book, stating in 2009 that ‘perhaps the most serious flaw in The Bomb was that it was much too optimistic about the future’ and believe that it achieved their goals because ‘it alerted people to the importance of environmental issues and brought human numbers into the debate on the human future.’ The Population Bomb was written at the suggestion of David Brower the executive director of the environmentalist Sierra Club, and Ian Ballantine of Ballantine Books following various public appearances Ehrlich had made regarding population issues and their relation to the environment. Although the Ehrlichs collaborated on the book, the publisher insisted that a single author be credited, and also asked to change their preferred title: Population, Resources, and Environment. The title Population Bomb was taken (with permission) from General William H. Draper, founder of the Population Crisis Committee and a pamphlet issued in 1954 by the Hugh Moore Fund. The Ehrlichs regret the choice of title, which they admit was a perfect choice from a marketing perspective, but think that ‘it led Paul to be miscategorized as solely focused on human numbers, despite our interest in all the factors affecting the human trajectory.’ … One frequent criticism of The Population Bomb is that it focused on spectacle and exaggeration at the expense of accuracy. Pierre Desrochers and Christine Hoffbauer remark that ‘at the time of writing The Population Bomb, Paul and Anne Ehrlich should have been more cautious and revised their tone and rhetoric, in light of the undeniable and already apparent errors and shortcomings of Osborn and Vogt’s analyses.’ Charles Rubin has written that it was precisely because Ehrlich was largely unoriginal and wrote in a clear emotionally gripping style that it became so popular. …”
Wikipedia
NY Times: The Unrealized Horrors of Population Explosion (Video)(May 2015)
Smithsonian: The Book That Incited a Worldwide Fear of Overpopulation (January 2018)
A long fuse: ‘The Population Bomb’ is still ticking 50 years after its publication (Video)
amazon
YouTube: The Population Bomb? | Retro Report | The New York Times