In Your Heart You Know He’s Nixon By Gloria Steinem 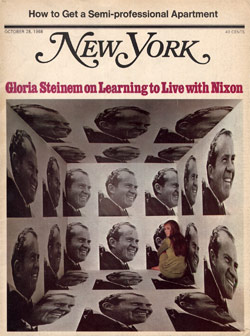 “The last night of the Democratic Convention in Chicago, with bloodstains still visible on the sidewalks of Michigan Avenue and 20,000 armed men still pursuing fewer demonstrators than have been peacefully contained in Central Park on a summery Sunday, the McCarthy and McGovern and Kennedy forces gave each other one final instruction: to applaud Hubert Humphrey. They would seize on the first decent statement in his acceptance speech—a peaceful step in Vietnam, some distress at seeing students and delegates gassed in the streets; anything—and cheer and applaud that statement in the hope that it would be followed up and enlarged upon, as Humphrey frequently follows and enlarges upon any statement that gets good audience reaction, so that this choice of the Democratic machine might inadvertently find himself committed in public to something constructive. Of course, it didn’t work. It was a pathetic, heat-of-battle instruction among the ranks, and a high-level version of the same idea had already failed that afternoon when George McGovern and his chief convention aide, Frank Mankiewicz, had met with Humphrey in his hotel suite. ‘I am here to speak to Democrats, and only Democrats; will all the security men please leave the floor? . . . Our problem is that we have not talked to each other, have not really been in touch with each other . . .’ That was the beginning of the acceptance speech Mankiewicz had suggested to Humphrey, a dramatic speech that might have bridged some of the terrible emotional distance between the peace forces and the Establishment, between the old Humphrey and his current stance as Cowardly Lion. But the candidate didn’t listen. In the end, he did make some disapproving reference to the fate of dissenters out of respect for McGovern, but it was too weak to bridge any part of the gap, or even to annoy Mayor Daley. In fact, we were all probably wrong to try. Even a dramatic gesture like the one Frank Mankiewicz had thought up out of despair might have done no good. What a man stands for matters much more than the words he uses; something Wallace supporters have understood right through all the watered-down speeches and the wreaths laid on Lincoln’s grave. Given by a candidate who meant something, the acceptance speech Humphrey finally made might not have been bad at all.  …”
New York Magazine
Rolling Stone: Fear and Loathing in Washington by Hunter S. Thompson