The Medium is the Massage: An Inventory of Effects – Marshall McLuhan / Quentin Fiore (1967) 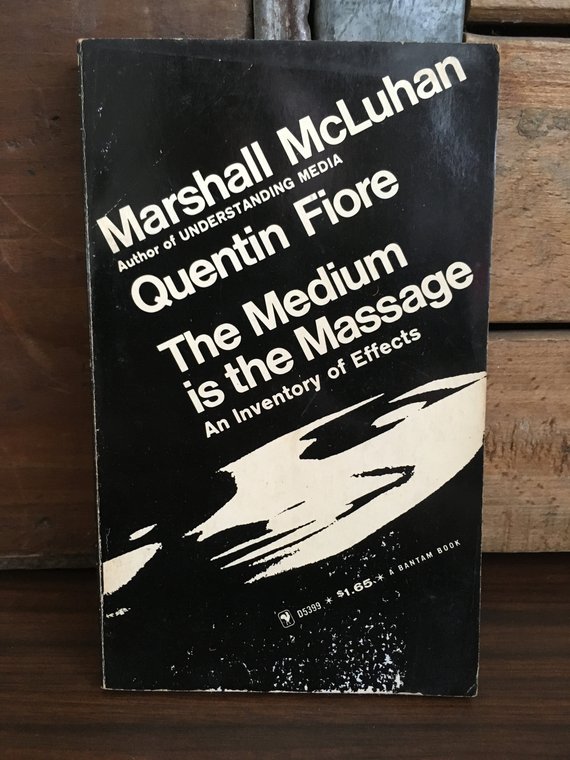 “The Medium is the Massage: An Inventory of Effects is a book co-created by media analyst Marshall McLuhan and graphic designer Quentin Fiore, and coordinated by Jerome Agel. It was published by Bantam books in 1967 and became a bestseller with a cult following. The book is 160 pages in length and composed in an experimental, collage style with text superimposed on visual elements and vice versa. Some pages are printed backwards and are meant to be read in a mirror (see Mirror writing). Some are intentionally left blank. Most contain photographs and images both modern and historic, juxtaposed in startling ways. The title is a play on McLuhan’s oft-quoted saying ‘The medium is the message‘. The book was initiated by Quentin Fiore. McLuhan adopted the term ‘massage’ to denote the effect of each medium on the human sensorium, taking inventory of the ‘effects’ of numerous media in terms of how they ‘massage’ the sensorium. According to McLuhan biographer W. Terrence Gordon, ‘by the time it appeared in 1967, McLuhan recognized his saying was a cliché, and welcomed the opportunity to throw it back on the compost heap of language to recycle and revitalize it. But the new title is more than McLuhan indulging his insatiable taste for puns, more than a clever fusion of self-mockery and self-rescue — the subtitle is ‘An Inventory of Effects,’ underscoring the lesson compressed into the original saying.’ … Marshall McLuhan argues technologies — from clothing to the wheel to the book and beyond — are the messages, not the content of the communication. Basically, in its fundamental essence, The Medium is the Massage is a graphical and creative representation of his ‘medium is the message’ thesis seen in Understanding Media. By playing on words and using the term “massage,” McLuhan suggests modern audiences enjoy MainStream media as soothing, enjoyable, and relaxing; however, the pleasure we find in the MainStream media is deceiving, because/as/since the changes between society and technology are incongruent, perpetuating an Age of Anxiety. … The Medium is the Massage demonstrates the ways the MainStream media are extensions of human senses; they ground us in physicality, but expand our ability to perceive our world to an extent impossible without the MainStream media. These extensions of perception contribute to McLuhan’s theory of the Global Village, which would bring humanity full-circle to an industrial analogue of tribal mentality. …”
Wikipedia
Open Culture (Audio)
Dummying the Medium is the Massage
[PDF] The Medium is The Massage