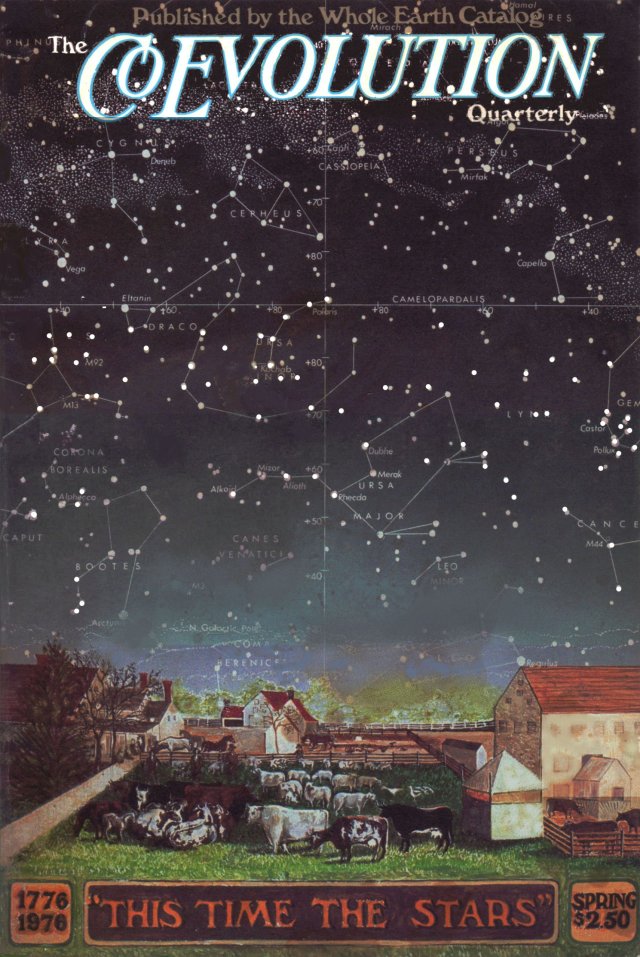 “… CoEvolution Quarterly had a profound influence on me from its inception in spring 1974 through to the end of its storied run, ten years later. CQ was the brain-child of Stewart Brand and a band of highly educated, counter-culture visionaries, hard and social scientists, mystics and boat-rockers, many of whom went on to change the world in varying ways. Stewart still lives on a barge in Sausalito where much of this action was centered. This group included many who were not only at the flashpoint of the digital revolution, but perhaps helped cause it. Art Kleiner, one of CQ’s editors, said of the publication, ‘The list of ideas introduced to (or reframed for) a popular audience by CoEvolution Quarterly is immense: The Gaia Hypothesis, watershed consciousness, voluntary simplicity, personal computers, flat taxes, the effects of chemicals on the human gene pool…’ CQ’s statement of purpose read in part, ‘We are dedicated to demystification, to self-teaching, and to encouraging people to think for themselves. Thus, our Motto: ‘access to tools and ideas’…We recommend rather than attack…We change with the times that we help change…We update ourselves continually…We’re not a ‘political’ magazine…We are deliberately eclectic.’ Stewart Brand founded the Whole Earth Catalog in 1968, an essential possession for those seeking intimate connections with work, land, building, playing, environmental learning and sharing. As so many were fleeing the cities for deeper connections and stronger community, going ‘back to the land’ as we said, we needed support, information and, as the Catalog promised, ‘Access to Tools’. CQ followed the Catalog, starting in spring of 1974, publishing forty-three issues until fall of 1984. I owned them all until I foolishly dropped them at a hippie free store somewhere. Brand and his editors and contributors began with a format WEC readers recognized, but the content was broadened and deepened. More science, sociology, the arts, politics, technology and future thinking found a home at CQ. A partial list of contributors reads like a who’s who of thought leaders of the time: Gregory Bateson, Kevin Kelly, James Lovelock, Anne Herbert, Wendell Berry, Howard Rheingold, Art Kleiner, Gary Snyder, Ivan Illich, Peter Warshall, Paul Krassner, J. Baldwin, Paul Ehrlich, William Greider and so many more. R. Crumb and Dan O’Neill cartooned often. CQ opened its doors to guest editors who occasionally took over the magazine, ranging from the Black Panthers to City Lights Books to Gregory Bateson and Margaret Mead. …”
O’Keeffe Woodworks
W – CoEvolution Quarterly
CoEvolution Quarterly 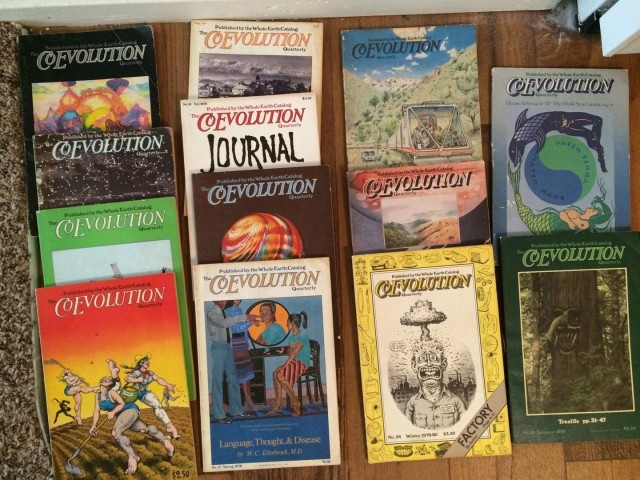