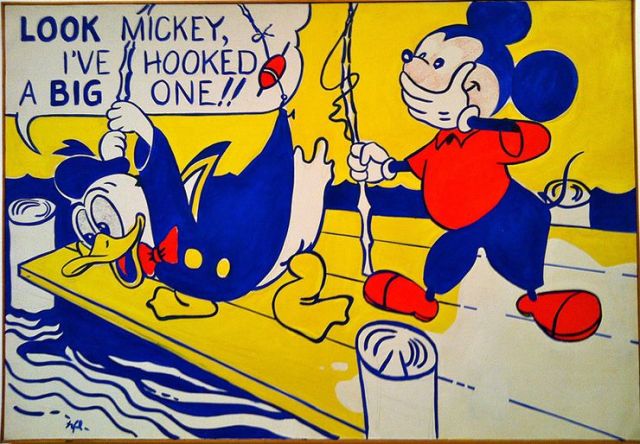 “Look Mickey (also known as Look Mickey!) is a 1961 oil on canvas painting by Roy Lichtenstein. Widely regarded as the bridge between his abstract expressionism and pop art works, it is notable for its ironic humor and aesthetic value as well as being the first example of the artist’s employment of Ben-Day dots, speech balloons and comic imagery as a source for a painting. The painting was bequeathed to the Washington, D.C., National Gallery of Art upon Lichtenstein’s death. Building on his late 1950s drawings of comic strips characters, Look Mickey marks Lichtenstein’s first full employment of painterly techniques to reproduce almost faithful representations of pop culture and so satirize and comment upon the then developing process of mass production of visual imagery. In this, Lichtenstein pioneered a motif that became influential not only in 1960s pop art but continuing to the work of artists today. Lichtenstein borrows from a Donald Duck illustrated story book, showing Mickey Mouse and Donald Duck during a fishing mishap. However, he makes significant alterations to the original source, including modifying the color scheme and perspective, while seeming to make statements about himself. The work dates from Lichtenstein’s first solo exhibition, and is regarded by art critics as revolutionary both as a progression of pop art and as a work of modern art in general. It was later reproduced in his 1973 painting, Artist’s Studio—Look Mickey, which shows the painting hanging prominently on a facing wall of Lichtenstein’s studio. … A number of stories purport to tell of the moment of inspiration for Look Mickey. Critic Alice Goldfarb Marquis writes that the artist recalled one of his sons pointing to a comic book and challenging; ‘I bet you can’t paint as good as that’. Another says that the painting resulted from an effort to prove his abilities to both his son and his son’s classmates who mocked Lichtenstein’s hard-to-fathom abstracts. American painter Allan Kaprow once stated, in reference to a Bazooka Dubble Bubble Gum wrapper, to Lichtenstein, ‘You can’t teach color from Cézanne, you can only teach it from something like this.’ Lichtenstein then showed him one of his Donald Duck images. During the comic book phase of his career, Lichtenstein often slightly altered the colorization of the original source. …”
Wikipedia
On a Dare from His Son, Roy Lichtenstein Unwittingly Invented Pop Art
NGA 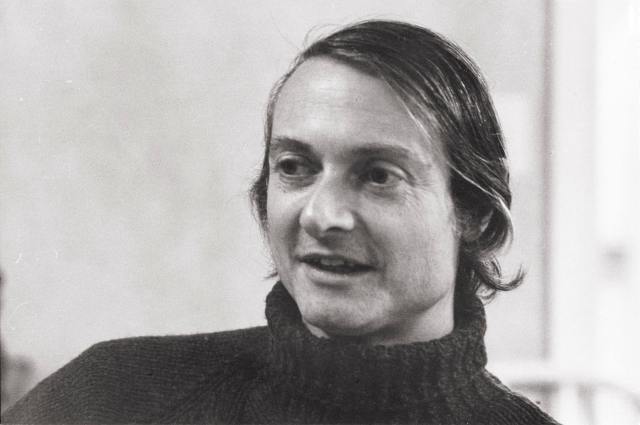