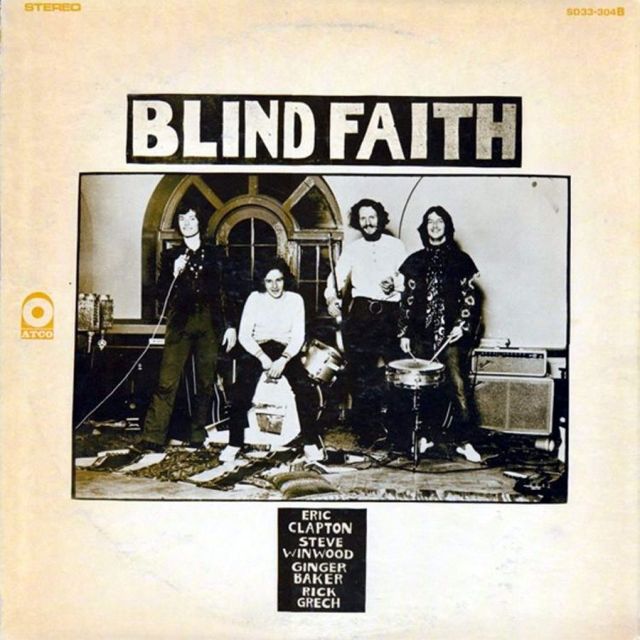 “Blind Faith were an English blues rock band, composed of Eric Clapton, Ginger Baker, Steve Winwood and Ric Grech. The band, which was one of the first supergroups, released their only album, Blind Faith, in August 1969. Stylistically similar to the bands in which Winwood, Baker and Clapton had most recently participated, Traffic and Cream, Blind Faith helped to pioneer the genre of blues/rock fusion. The beginnings of Blind Faith begin in mid-1968, with the break-up of Cream. Today considered to be the first true supergroup, Cream had become a financial powerhouse, selling millions of records within a few years and bringing international popularity to both the group and each individual member. Despite that success, the band was crumbling from within because of frequent animosity between Jack Bruce and Ginger Baker, with Eric Clapton doing his best to mediate. In addition, Clapton had tired of playing commercially-driven blues and hoped to move forward with a new, experimental, less straitjacketed approach to the genre. Steve Winwood was facing similar problems in The Spencer Davis Group, where he had been the lead singer for three years. Winwood wanted to experiment with the band’s sound by infusing jazz elements, but left due to his musical differences, instead forming a new band—Traffic—in 1967. That band split temporarily in 1969, and Winwood started to jam with his good friend Clapton in Clapton’s basement in Surrey, England. Winwood and Clapton had previously collaborated on the ‘Powerhouse‘ project. Clapton was pleased with the jam sessions with Winwood, but was hesitant to start a serious group. At one point, the pair thought they might record with Duck Dunn and Al Jackson, the rhythm section of Booker T. & the M.G.’s, though the music press hoped that Clapton would form a band that would outdo Cream. Ginger Baker turned up again one day to sit in with them in 1969, and the band took near-final form. Clapton questioned letting Baker in the band, because he had promised Jack Bruce that, if they were to work with one another again, all three of them would play. Moreover, Clapton didn’t want to reunite with Cream barely nine weeks after the break-up, and also didn’t want to deal with another ‘Cream-like’ super-stardom situation. Winwood ultimately persuaded Clapton to finalize Baker’s inclusion in the line-up, arguing that Ginger Baker strengthened their musicianship and that it would be hard to find an equally talented drummer. …”
Wikipedia
allmusic (Audio)
allmusic [2000 Deluxe Edition] (Audio)
Discogs (Video), Discogs (2)
amazon: Blind Faith, [2000 Deluxe Edition]
YouTube: Blind faith in Hyde Park 1969 (Live) 57:20, Can’t Find My Way Home, Can’t Find My Way Home (Electric Version), Eric Clapton Blind Faith 1969