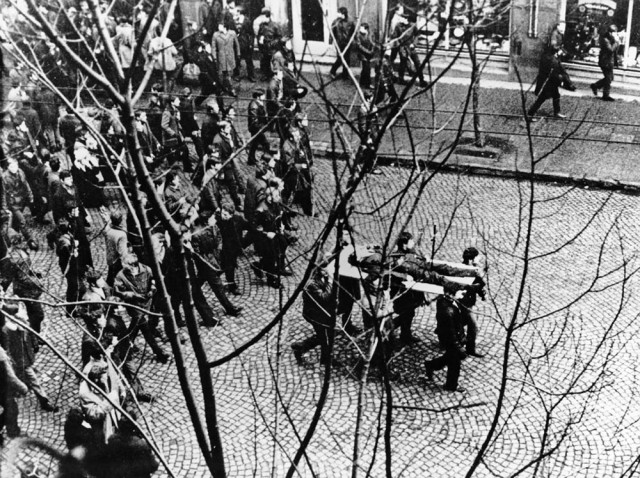 “The Polish 1970 Strikes (Polish: Grudzień 1970, ‘December 1970’) occurred in northern Poland in December 1970. The protests were sparked by a sudden increase of prices of food and other everyday items. As a result of the strikes, which were put down by the Polish People’s Army and the Citizen’s Militia, at least 42 people were killed and more than 1,000 wounded. In December 1970 the government suddenly announced major increases in the prices of basic foodstuffs, especially dairy products after a bad harvest throughout the course of that year. The rise in prices proved to be a major shock to ordinary citizens, especially in the larger cities. Demonstrations against the price rises broke out in the northern Baltic coastal cities of Gdańsk, Gdynia, Elbląg, and Szczecin. The regime was afraid of a wave of sabotage that was being started, which may have been inspired by the secret police, who wanted to legitimize a harsh response to the protesters. In Gdynia the soldiers had orders to stop workers returning to work and on December 17 they fired into the crowd of workers emerging from their trains; hundreds of workers were killed or wounded. The protest movement then spread to other cities, leading to strikes and occupations. The government mobilized 5,000 members of special squads of police and 27,000 soldiers equipped with heavy tanks and machine guns. Over 1,000 people were wounded and at least 40 killed (other numbers often cited are 39 and 44) and 3,000 arrested, by modern accounts. Only six people were reported dead by the government at the time. All those who died were buried overnight, with only the closest relatives present, in order to avoid spreading the riots. The Party leadership met in Warsaw and decided that a full-scale working-class revolt was inevitable unless drastic steps were taken. With the consent of Leonid Brezhnev in Moscow, Gomułka, Kliszko, and other leaders were forced to resign: if the price rises had been a plot against Gomułka, it succeeded. Since Moscow would not accept Mieczysław Moczar, Edward Gierek was drafted as the new leader. The price increases were reversed, wage increases announced, and sweeping economic and political changes were promised. Gierek went to Gdańsk and met the workers, apologised for the mistakes of the past, promised a political renewal and said that as a worker himself he would now govern for the people. …”
Wikipedia
An Illustrated History of Slavic Misery
Polish shipyard workers’ initiate regime change, 1970-71