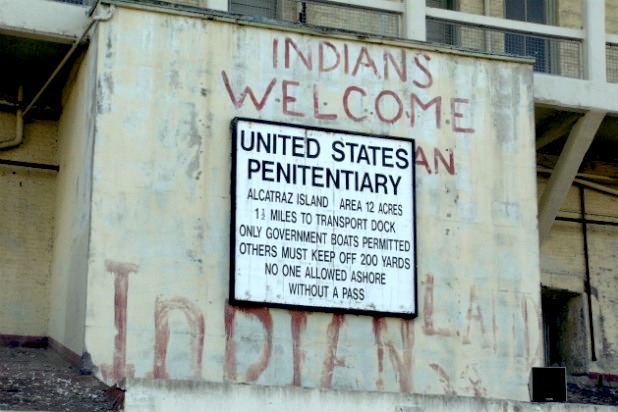 “The Occupation of Alcatraz was an occupation of Alcatraz Island by 89 American Indians and supporters, led by Richard Oakes, LaNada Means, and others. They chose the name Indians of All Tribes (IOAT) and John Trudell was the spokesperson. According to the IOAT, under the Treaty of Fort Laramie (1868) between the U.S. and the Lakota, all retired, abandoned or out-of-use federal land was returned to the Native people who once occupied it. Since Alcatraz penitentiary had been closed on March 21, 1963, and the island had been declared surplus federal property in 1964, a number of Red Power activists felt the island qualified for a reclamation. The Alcatraz Occupation lasted for nineteen months, from November 20, 1969, to June 11, 1971, and was forcibly ended by the U.S. government. The Occupation of Alcatraz had a brief but somewhat direct effect on federal Indian Termination policies, and established a precedent for Indian activism. Oakes was shot to death in 1972, and the American Indian Movement was later targeted by the federal government and the FBI in COINTELPRO operations. On March 8, 1964, a small group of Sioux demonstrated by occupying the island for four hours. The entire party consisted of about 40 people, including photographers, reporters and Elliot Leighton, the lawyer representing those claiming land stakes. According to Adam Fortunate Eagle, this demonstration was an extension of already prevalent Bay Area street theater used to raise awareness. The Sioux activists were led by Richard McKenzie, Mark Martinez, Garfield Spotted Elk, Virgil Standing-Elk, Walter Means, and Allen Cottier. Cottier acted as spokesman for the demonstration, stating that it was ‘peaceful and in accordance with Sioux treaty rights.’ … In the early morning hours of November 20, 1969, 89 American Indians, including over 30 women, students, married couples and six children, set out to occupy Alcatraz Island. A partially successful Coast Guard blockade prevented most of them from landing, but fourteen protesters landed on the island to begin their occupation. The island’s lone guard, who had been warned of the impending occupation, sent out a message on his radio. ‘Mayday! Mayday!’ he called. ‘The Indians have landed!’ At the height of the occupation there were 400 people. Native and non-native people brought food and other necessary items to the people on the island, but the coast guard’s blockades made it increasingly difficult to supply the occupants with food. The suppliers, after stealthily journeying across the bay via canoe, dropped off the supplies which then had to be carried up steep ladders. The occupation lasted about 19 months but ended peacefully. …”
Wikipedia
1969-1971: The occupation of Alcatraz
The occupation of Alcatraz 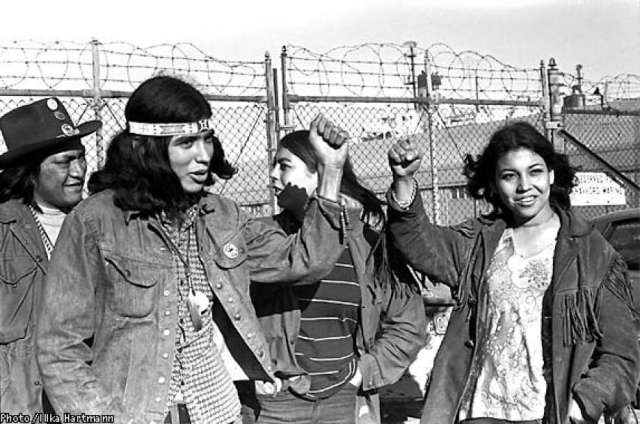