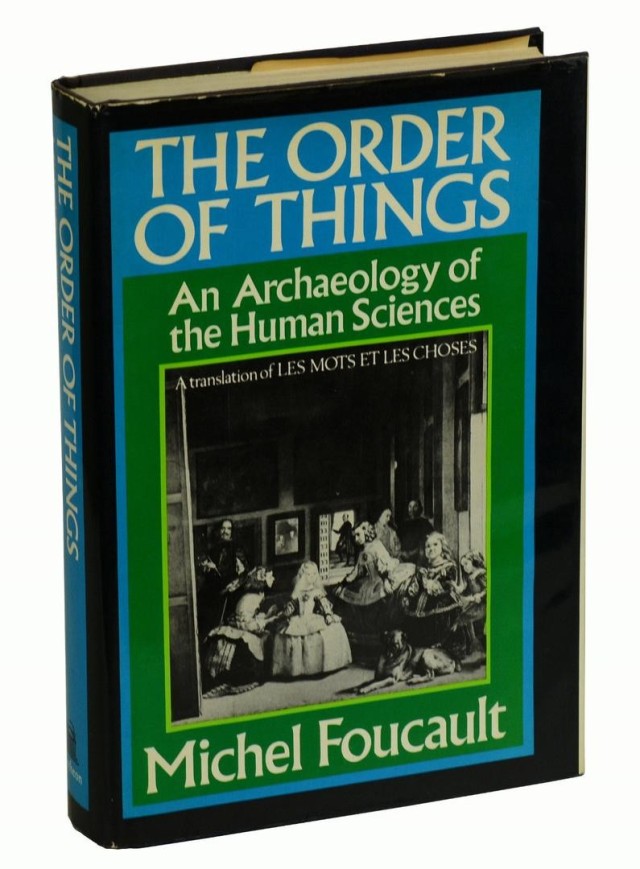 “The Order of Things: An Archaeology of the Human Sciences (French: Les mots et les choses: Une archéologie des sciences humaines) is a 1966 book by the French philosopher Michel Foucault. It was translated into English and published by Pantheon Books in 1970. (Foucault had preferred L’Ordre des Choses for the original French title, but changed the title because it had been used by two structuralist works published immediately prior to Foucault’s). Foucault endeavours to excavate the origins of the human sciences, which have their root in ‘life, labour, and language’, that is: biology, economics, and linguistics. The book opens with an extended discussion of Diego Velázquez‘s painting Las Meninas and its complex arrangement of sightlines, hiddenness, and appearance. Then it develops its central claim: that all periods of history have possessed certain underlying epistemological assumptions that determined what was acceptable as, for example, scientific discourse. Foucault develops the notion of episteme, and argues that these conditions of discourse have changed over time, from one period’s episteme to another. Foucault demonstrates parallels in the development of three fields: linguistics, biology, and economics. … Foucault’s critique has been influential in the field of cultural history. The various shifts in consciousness that he points out in the first chapters of the book have led several scholars, such as Theodore Porter, to scrutinize the bases for knowledge in our present day as well as to critique the projection of modern categories of knowledge onto subjects that remain intrinsically unintelligible, in spite of historical knowledge. The Order of Things brought Foucault to prominence as an intellectual figure in France. A review by Jean-Paul Sartre attacked Foucault as ‘the last barricade of the bourgeoisie’. Foucault responded, ‘Poor bourgeoisie; If they needed me as a ‘barricade’, then they had already lost power!’ …”
Wikipedia
NY Times: The Order Of Things By GEORGE STEINER (Feb. 28, 1971)
Order of Things, Preface
amazon
[PDF] The Order of Things
YouTube: PHILOSOPHY – Michel Foucault