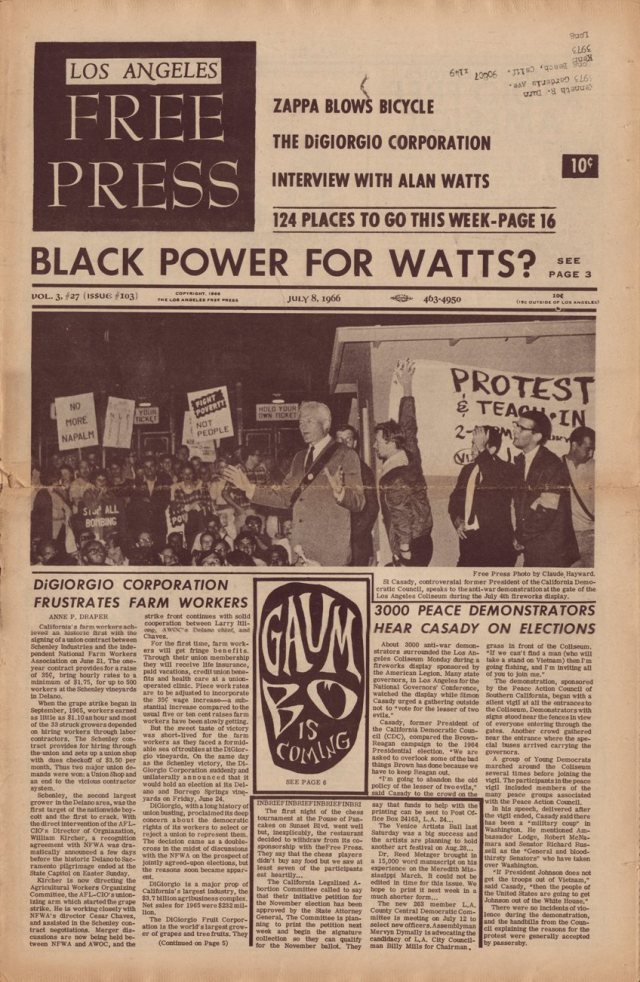 “The Los Angeles Free Press, also called ‘The Freep’, was among the most widely distributed underground newspapers of the 1960s. It is often cited as the first such newspaper. The Free Press was edited and published weekly, for most of its existence, by Art Kunkin. The first incarnation of The Freep was published from 1964–1978. In 2005, a new incarnation of the Free Press began publication, and continues to this day. The Free Press was notable for its radical politics when, in the mid-1960s, such views rarely saw print. The Free Press wrote about and was often directly involved in the major historic issues and people of the 1960s and 1970s, including the Chicago Seven, Timothy Leary, Allen Ginsberg and Abbie Hoffman. Both the famous and the infamous would open up to the Los Angeles Free Press, from Bob Dylan to the Black Panthers to Jim Morrison to Iceberg Slim. This was a new kind of journalism at that time.  The Free Press saw itself as an advocate of personal freedom as well as a vehicle to aid the anti-Vietnam war movement. Because of its coverage of the Vietnam War and how it became a touchstone for anti-war activists, The Los Angeles Free Press is given degrees of credit for the ending of the War. It grew with the movement and at its peak was selling over 100,000 copies, with national distribution. The Free Press was a founding member of the Underground Press Syndicate, a network of 600 community, student, and alternative newspapers throughout the United States. The paper also pioneered the emerging field of underground comics by publishing the ‘underground’ political cartoons of Ron Cobb; and Gilbert Shelton‘s Fabulous Furry Freak Brothers started appearing as a regular feature in 1970. Art Kunkin, at the time of the founding of The Los Angeles Free Press, was a 36-year-old unemployed tool-and-die worker and former organizer for the Socialist Workers Party (SWP), where he had served as business manager of the SWP paper, The Militant. The Free Press initially appeared as a one-shot 8-page tabloid, dated May 23, 1964, sold at the annual Los Angeles Renaissance Pleasure Faire and May Market, a fund-raising event for listener-sponsored KPFK radio. This first issue was entitled The Faire Free Press, with the logo ‘Los Angeles Free Press’ appearing on an inside page, and a coupon soliciting subscribers. Five thousand copies were printed, of which 1,200 sold at a price of 25 cents. …”
Wikipedia
Los Angeles Free Press
Los Angeles Free Press (often called “the Freep”)
JOHN WILCOCK: Editing the Los Angeles Free Press
Ron Cobb’s Cartoons for the ‘Los Angeles Free Press’, 1965 – 1970