Renaissance of the Upper West Side – Nicholas Pileggi 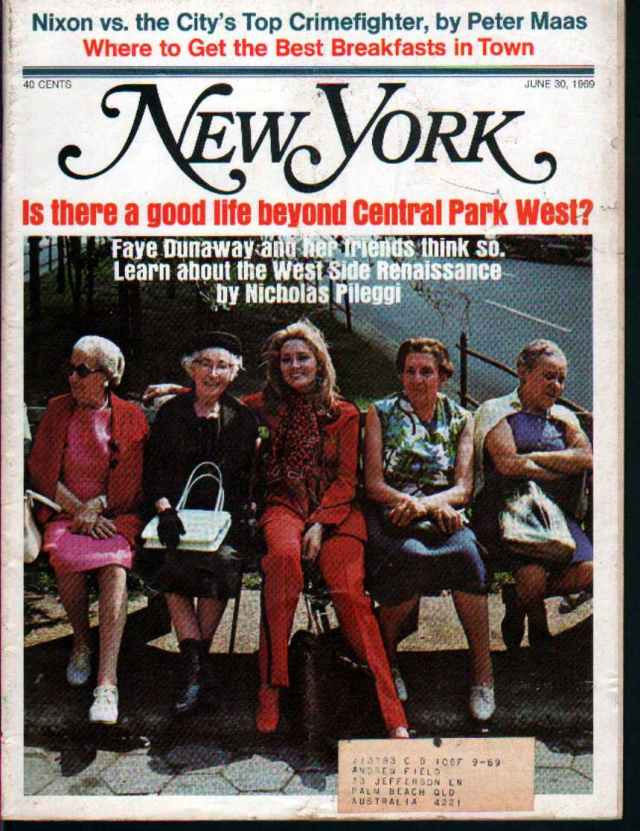 “Five years ago the West Side of Manhattan was considered such a dangerously blighted area that invitations to parties on Riverside Drive were often rejected, large rent-controlled apartments were voluntarily given up and even Chicken Delight wouldn’t deliver. Today, while many of the area’s most critical problems remain, an unmistakable mood of confidence has replaced earlier premonitions of doom. Merchants, real-estate men, bankers, theatre owners, city planners, restaurateurs, newsdealers and the trustees of private schools all agree with what Mayor John V. Lindsay admits privately: ‘The Upper West Side is probably enjoying more of a renaissance today than any other single neighborhood of our city.’ In the 64-block-long area west of Central Park between Columbus Circle to the south and Columbia University to the north, the evidence is visible. Not only are there new low-and middle-income housing developments now where the rubble of abandoned buildings and slums stood just five years ago, but hundreds of the area’s crumbling rooming houses have been renovated to accommodate increasing numbers of middle-class tenants, and even a few of the neighborhood’s middle-European rococo hotels have been steam-cleaned. The same kind of young, successful and relatively affluent middle-class families that moved to the suburbs 20 years ago and to the East Side 10 years ago are moving to the West Side today, and while the neighborhood still has an ample supply of teenage muggers, parading homosexuals and old men who wear overcoats in July, the over-all mood of the area seems to have changed. More baby carriages are in evidence; young, long-haired lovers are sharing park benches with elderly socialists; hiphuggered mothers are getting fewer dirty looks from resident matriarchs; tall blonde girls in pantsuits are suddenly bouncing down Columbus Avenue; there are see-through blouses in the windows of stores that used to display black crepe dresses and pillbox hats, while borzois, miniature poodles and Basenjis are beginning to outnumber the mongrels. …”
New York Magazine