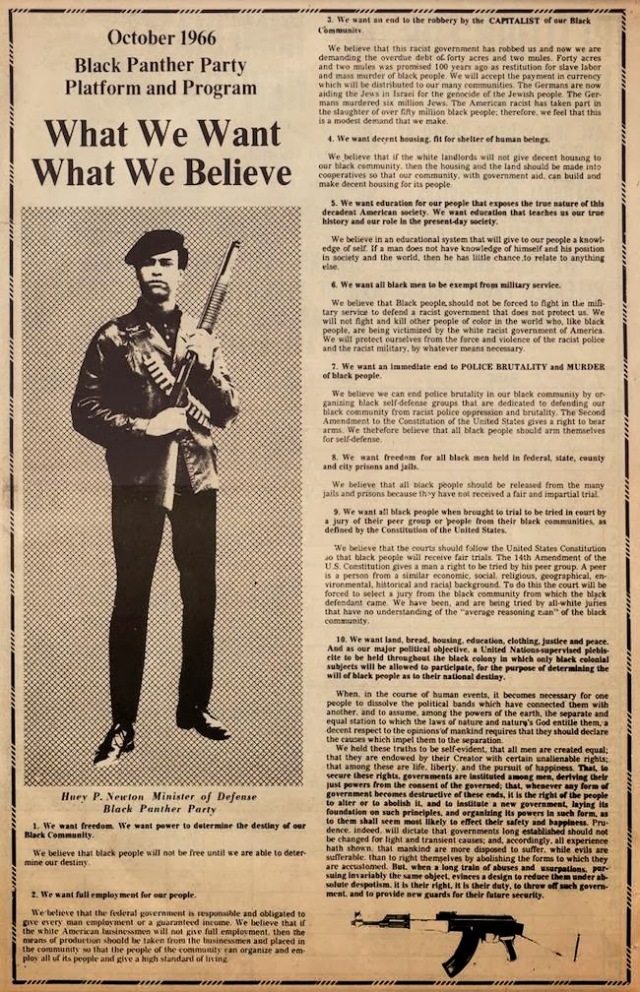 “The Ten-Point Program, or The Black Panther Party for Self-Defense Ten-Point Platform and Program, is a set of guidelines to the Black Panther Party and states their ideals and ways of operation, a ‘combination of a Bill of Rights and a Declaration of Independence.’ The document was created in 1966 by the founders of the Black Panther Party, Huey P. Newton and Bobby Seale, whose political thoughts lay within the realm of Marxism and Black Nationalism. Each one of the statements were put in place for all of the Black Panther Party members to live by and actively practice every day. The Ten-Point program was released on May 15, 1967 in the second issue of the party’s weekly newspaper, The Black Panther. All succeeding 537 issues contained the program, titled ‘What We Want Now!.’ The Ten Point Program comprised two sections: The first, titled ‘What We Want Now!’ described what the Black Panther Party wants from what they would describe as the racist leaders of American Society. The second section, titled ‘What We Believe,’ outlines the philosophical views of the party and the rights that African Americans should have, but are denied. It is structured similarly to the United States Bill of Rights of the U.S. Constitution. ‘What We Believe’ expands on the first section, making demands of what will be deemed sufficient payment for the injustices committed against the Black Community. For example, one section states that, ‘We believe that this racist government has robbed us and now we are demanding the overdue debt of forty acres and two mules. Forty acres and two mules was promised 100 years ago as a restitution for slave labor and mass murder of black people’. It continues to state that ‘We will accept this payment in currency which will be distributed to our many communities.’ Newton and Seale believed that the Black community had been deprived of these benefits over the years, and that the only way to correct this injustice was in repayment of assets that had been lost to them over many years of slavery. The ten-point platform was important for the Black Panther Party because it laid out the ‘physical needs and all the philosophical principles’ they expected and that could be understood by everyone. When Huey Newton talked about the platform, he stated that these things were not something new but something that ‘black people have been voicing all along for over 100 years since the Emancipation Proclamation and even before that.’  This platform was essential to the party, because it allowed for them to state their wants, needs, and beliefs that people could read and easily understand. …”
Wikipedia
The Black Panther Party’s Ten-Point Program, 50 years later
YouTube: Bobby Seale – The Black Panther Party’s Ten Point Program