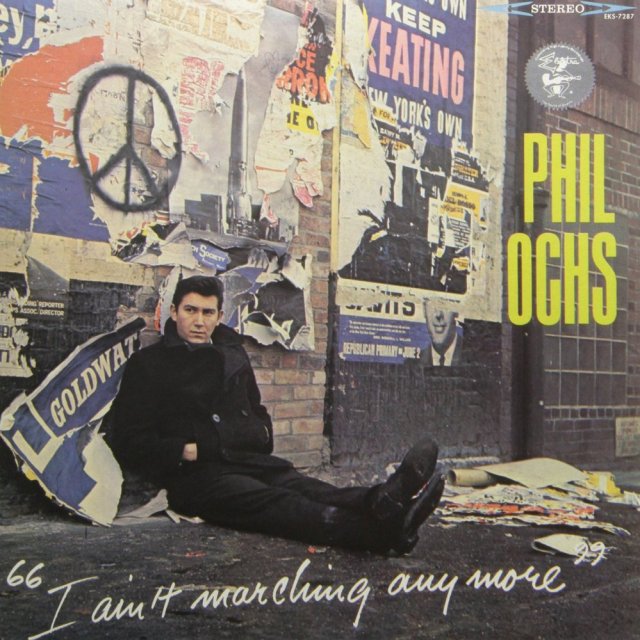 “I Ain’t Marching Anymore is Phil Ochs‘ second LP, released on Elektra Records in 1965. Dispensing with second guitarist Danny Kalb, Ochs performs alone on twelve original songs, an interpretation of Alfred Noyes‘ ‘The Highwayman‘ set to music (much as Poe‘s ‘The Bells’ had been set to music on the previous album) and a cover of Ewan MacColl‘s ‘The Ballad of the Carpenter’. Of the twelve originals, probably the most noted was the title track, with its distinctive trilling guitar part, that spoke of a soldier sick of fighting. Also of note was the album closer, ‘Here’s to the State of Mississippi’, a biting criticism of that state’s lack of civil rights and general bigoted attitude. Other important songs include ‘Draft Dodger Rag‘ (assailing those ‘red blooded Americans’ who were in favor of US participation in the Vietnam War but did not fight because they were just summertime soldiers and sunshine patriots), ‘That Was The President’ (a tribute to John Kennedy written soon after his assassination), ‘Talking Birmingham Jam’ (which used the traditional talking blues form to assail the racist leaders of Birmingham) and ‘Links on the Chain’ (attacking labor unions for excluding African-Americans and failing to support civil rights). Ochs showed great thematic versatility on the album, including not just blatantly anti-war or protest songs but also poetry (Alfred Noyes, John Rooney, and Ewan MacColl) and some songs his followers probably didn’t want to hear. …”
Wikipedia
“‘Draft Dodger Rag’ is a satirical anti-war song by Phil Ochs, a U.S. protest singer from the 1960s known for being a harsh critic of the American military industrial complex. … Ochs wrote ‘Draft Dodger Rag’ as American involvement in the Vietnam War was beginning to grow. The song is sung from the perspective of a gung-ho young man who has been drafted. When he reports for duty, however, the young man recites a list of reasons why he can’t serve, including poor vision, flat feet, a ruptured spleen, allergies and asthma, back pain, addiction to multiple drugs, his college enrollment, his disabled aunt, and the fact that he carries a purse. … As the song ends, the young man tells the sergeant that he’ll be the first to volunteer for ‘a war without blood or gore’. …”
W – “Draft Dodger Rag”
Pitchfork
amazon, iTunes
vevo: I Ain’t Marching Anymore (Live)
YouTube: I Ain’t Marching Anymore (Full)