Hunter S. Thompson, The Art of Journalism No. 1 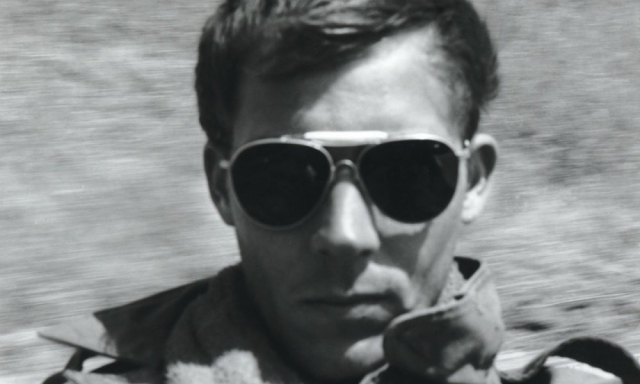 “In an October 1957 letter to a friend who had recommended he read Ayn Rand’s The Fountainhead, Hunter S. Thompson wrote, ‘Although I don’t feel that it’s at all necessary to tell you how I feel about the principle of individuality, I know that I’m going to have to spend the rest of my life expressing it one way or another, and I think that I’ll accomplish more by expressing it on the keys of a typewriter than by letting it express itself in sudden outbursts of frustrated violence. . . .’ Thompson carved out his niche early. He was born in 1937, in Louisville, Kentucky, where his fiction and poetry earned him induction into the local Athenaeum Literary Association while he was still in high school. Thompson continued his literary pursuits in the United States Air Force, writing a weekly sports column for the base newspaper. After two years of service, Thompson endured a series of newspaper jobs—all of which ended badly—before he took to freelancing from Puerto Rico and South America for a variety of publications. The vocation quickly developed into a compulsion. Thompson completed The Rum Diary, his only novel to date, before he turned twenty-five; bought by Ballantine Books, it finally was published—to glowing reviews—in 1998. In 1967, Thompson published his first nonfiction book, Hell’s Angels, a harsh and incisive firsthand investigation into the infamous motorcycle gang then making the heartland of America nervous. Fear and Loathing in Las Vegas, which first appeared in Rolling Stone in November 1971, sealed Thompson’s reputation as an outlandish stylist successfully straddling the line between journalism and fiction writing. As the subtitle warns, the book tells of ‘a savage journey to the heart of the American Dream’ in full-tilt gonzo style—Thompson’s hilarious first-person approach—and is accented by British illustrator Ralph Steadman’s appropriate drawings. …”
The Paris Review

1 Response to Hunter S. Thompson, The Art of Journalism No. 1