“Caterpillar was started by Clayton Eshleman as a series of chapbooks by such writers as Jackson Mac Low, David Antin, Paul Blackburn and Louis Zukofsky. ‘The Caterpillar Glyph,’ an image of a small napalmed Vietnamese girl, was printed on the cover with the statement ‘until the end of the war this black caterpillar,’ revealing the outspoken stance taken by Eshleman as an editor. Caterpillar,’a magazine of the leaf, a gathering of the tribes,’ began publication in October, 1967. Commercially produced and substantial in size, it provided considerable space, over the course of its 20 issues, for work by a wide range of younger writers and artists as well as many of those associated with its precursors, Black Mountain Review and Origin. Says Eshleman: ‘I saw a poetry magazine as a granary of sorts, where writing could be stored until it was to be consumed or consummated in a book, a midpoint between its inception and its ultimate form.’ Caterpillar‘s special attention to translation included a ‘test of translation’ in which differing versions of a poem were set ‘side by side and, with a minimum of comment, [to] encourage the reader to measure them as articulations of the original poem.’ Works of Vallejo, Montale, Cavafy, and Rilke, among others, were thus presented. The magazine was also attuned to important work in film, visual art, music and performance; it was not unusual to find film stills by Carolee Schneemann or Stan Brakhage; or drawings and collage by Nancy Spero, Jess Collins, Leon Golub, Robert LeVigne or Wallace Berman. Issue 12 devoted some 150 pages to work by Jack Spicer. Other regular contributors include Gary Snyder, Robert Duncan, Margaret Randall, Cid Corman, Diane Wakoski, Robert Kelly, and Jerome Rothenberg. On the name of the magazine, Eshleman recalled, ‘That special word was given me by Will Petersen on a Kyoto street corner in 1963, when he quoted Blake’s couplet The Caterpillar on the Leaf / Repeats to thee thy Mother’s grief.‘ …”
Granary Books
W – Clayton Eshleman 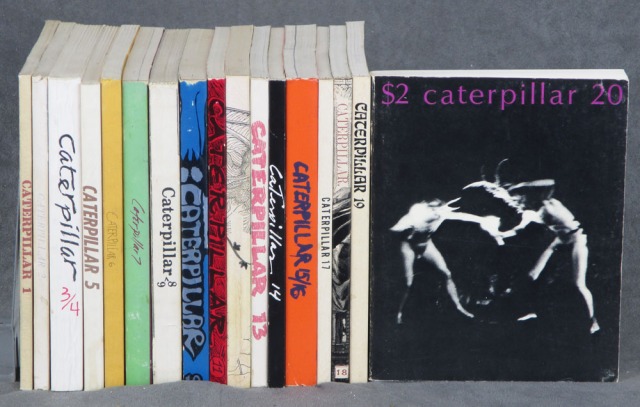