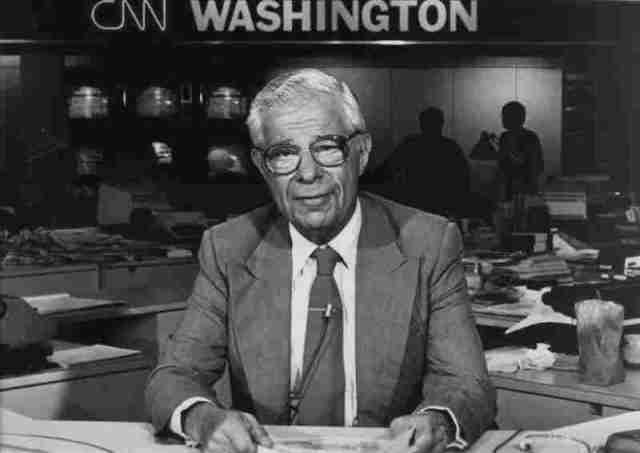 “Daniel Louis Schorr (August 31, 1916 – July 23, 2010) was an American journalist who covered world news for more than 60 years. He was most recently a Senior News Analyst for National Public Radio (NPR). Schorr won three Emmy Awards for his television journalism. … In January 1962, he aired the first examination of everyday life under communism in East Germany, The Land Beyond the Wall: Three Weeks in a German City, which The New York Times called a ‘journalistic coup’. After agreeing not to foster ‘propaganda’ for the United States, Schorr was granted the rights to conduct the interviews in the city of Rostock. By airing everyday life, Schorr painted a picture of the necessity for a Communist state to seal itself off from the West in order to survive. President John F. Kennedy‘s Secretary of State Dean Rusk criticized Schorr’s actions in an August 10, 1962 diplomatic cable for a checkbook journalism story in which, ‘Schorr involved himself in a matter which was far beyond his private or journalistic responsibilities and proceeded amateurishly in a matter filled with greatest danger for all concerned. … CBS executives were not amused when Schorr reported—incorrectly—that Barry Goldwater was said to ‘travel to Germany to join-up with the right-wing there’, and visit ‘Hitler’s one-time stomping ground’ in Berchtesgaden, immediately after he became the Republican nominee for president. For obvious reasons, this did not fare well with Goldwater, who demanded an apology for the ‘CBS conspiracy’ against his campaign for president. Schorr took a close journalistic interest in the career of Vice President of the United States Hubert Humphrey.  Schorr attracted the anger of Richard Nixon‘s White House. In 1971, after a dispute with White House aides, Schorr’s friends, neighbors, and co-workers were questioned by the Federal Bureau of Investigation (FBI) about his habits. They were told that Schorr was under consideration for a high-level position in the environmental area. Schorr knew nothing about it. Later, during the Watergate hearings, it was revealed that Nixon aides had drawn up what became known as Nixon’s Enemies List, and Daniel Schorr was on that list. Famously, Schorr read the list aloud on live TV, surprised to be reading his own name in that context. …”
Wikipedia
NY Times: Daniel Schorr, Journalist, Dies at 93
YouTube: News Legend Schorr Dies at 93, Nixon: raw watergate tape: “Going after Dan Schorr”