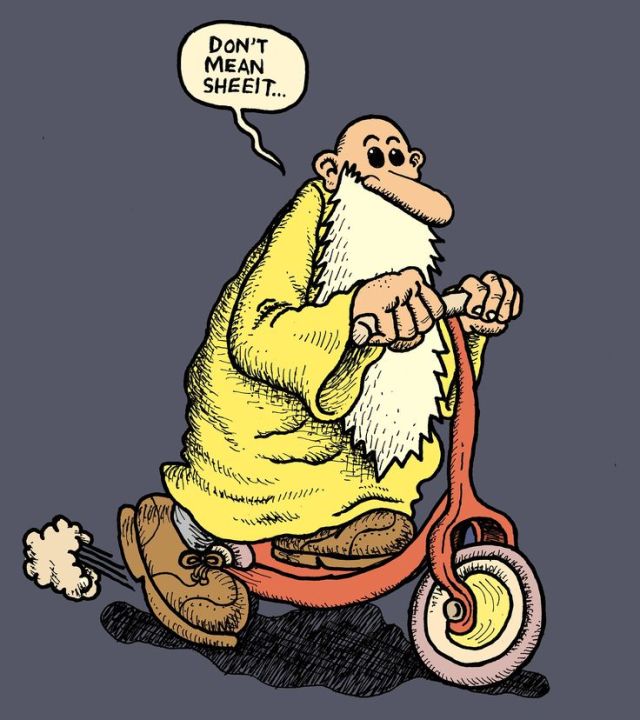 “Mr. Natural (Fred Natural) is a comic book character created and drawn by 1960s counterculture and underground comix artist Robert Crumb. First appearing in the premiere issue of Yarrowstalks (May 5, 1967), the character gained a following during the underground comix fad of the 1960s and 1970s, and has been extensively merchandised in various products. After debuting in Yarrowstalks, Mr. Natural made appearances in other underground newspapers such as the East Village Other. He made his first official comix appearance in Zap Comix #1 (Feb. 1968). Mr. Natural also appeared in early underground comix titles like Bijou Funnies, and Yellow Dog. He was a regular in Zap for the balance of the 1960s until appearing in his own three-issue title, originally co-published by The San Francisco Comic Book Company and Apex Novelties. Crumb created original Mr. Natural strips for The Village Voice from February 2, 1976, to November 29, 1976, which were first collected in Mr. Natural #3 (Kitchen Sink Press, 1977). After a ten-year hiatus, Mr. Natural returned in the pages of Crumb’s solo series, Hup (Last Gasp), and then after another gap, in Mystic Funnies #1 (Alex Wood, 1997). The character hasn’t made a new appearance since 2002. Mr. Natural’s various appearances were collected in The Complete Crumb Comics vol. 4, ‘Mr. Sixties!’ (Fantagraphics, 1989), The Book of Mr. Natural (Fantagraphics, 1995), as well as The Complete Crumb Comics vol. 11, ‘Mr. Natural Committed to a Mental Institution!’ (Fantagraphics, 1995). At first appearance, Mr. Natural is a mystic guru who spouts aphorisms on the evils of the modern world and the salvation to be found in mysticism and natural living. He has renounced the material world and lives off anything he can get in exchange for his nuggets of wisdom. Usually depicted as slightly overweight (although his size varies), he is bald with a long white beard, and wears a gown which makes him resemble ‘old man’ depictions of God or a prophet. …”
Wikipedia
YouTube: Mr Natural’s 719th Meditation