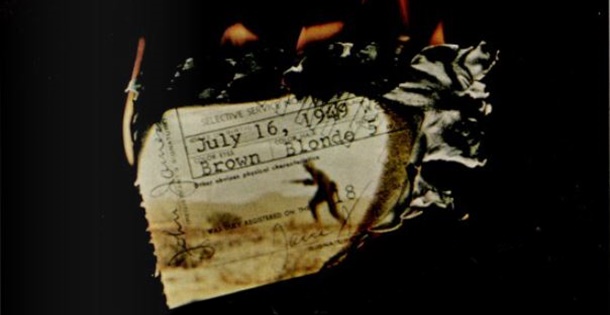 “A big interstate bus noses into the checkpoint on the Canadian border near Rouses Point, New York Canadian customs officials come aboard, accompanied by two FBI men. The agents have fugitive warrants in their pockets, and they are looking for young Americans of draft age trying to flee the country. They tap one boy on the shoulder. … It’s 10 a.m. in the offices of a big utility company in Chicago. Two FBI men and two federal marshals enter a supervisor’s cubicle and ask to speak with a young clerk. The youth is called out into the corridor, and the agents put him under arrest for violation of the Selective Service Act. They snap handcuffs on the young man’s wrists. … A Pfc. is standing at attention in the orderly room of a quartermaster company at Ft. Knox in Kentucky. A reservist, he is wearing civilian clothes. His company commander says to him. ‘I’m giving you a direct order to put on your uniform and report for duty.’ The young soldier says, ‘I cannot, for reasons of conscience.’ The company commander orders the soldier taken to the post stockade, where he is stripped and put in a steel isolation cell. … Two FBI men are working their way up Avenue A in New York City’s East Village hippie colony. They are asking about a boy named Johnson who failed to register for the draft in his hometown, Sacramento, Calif. and then disappeared. They walk right past Johnson without knowing it. Johnson hasn’t been Johnson for a long time. Hiding out with the hippies in San Francisco, Los Angeles, Chicago, and New York, he has used half a dozen names. In the East Village he is known simply as Scuby. …”
Saturday Evening Post
“Hell, No, We Won’t Go!” from the January 27, 1968, issue of The Saturday Evening Post.