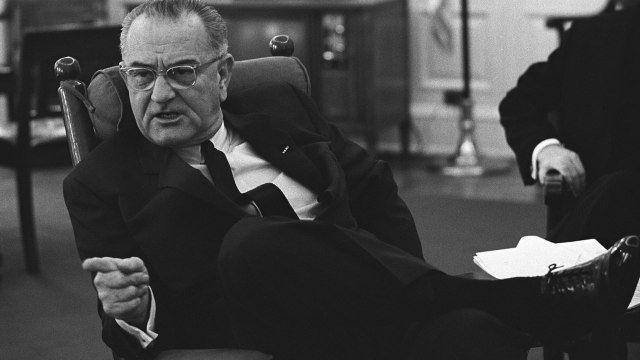 “The origins of the Vietnam War lie in 1945, when the British ignored Ho Chi Minh’s declaration of independence and restored French rule to the country. After a protracted conflict with Ho Chi Minh’s nationalist forces and a massive defeat at Dien Bien Phu, the French left Vietnam in 1954. During the Cold War many foreign policy analysts subscribed to ‘The Domino Theory’ — which contended that should one country come under communist rule, its neighbors were likely to follow suit. President Eisenhower, worried about the spread of communism, sent U.S. advisors to train forces in South Vietnam in 1956, and President Kennedy increased American forces significantly, with 12,000 U.S. military advisors stationed in Vietnam by 1962. But it was under President Johnson that the U.S. escalated the conflict to a full scale war. Explore the timeline of Johnson’s decision-making below, and listen to audio of Johnson’s phone conversations as he decides to escalate the war. …”
PBS Bill Moyers (Audio)
YouTube: Bill Moyers on LBJ’s Path to War Pt 1 of 2, Pt 2 of 2