“The whole world is watching”

“‘The whole world is watching’ was a chant by antiwar demonstrators outside the Conrad Hilton Hotel the evening of August 28 during the 1968 Democratic National Convention in Chicago. The event was broadcast from taped footage on the night of Wednesday, August 28, the third day of the convention. Demonstrators took up the chant as police were beating and pulling many of them into paddy wagons, ‘each with a superfluous whack of a nightstick,’ after the demonstrators, being barricaded in the park by the police, began to come into Michigan Avenue in front of the hotel. The prescient and apparently spontaneous chant quickly became famous. The following year, it served as the title of a television movie about student activism. On track 10 of their 1969 hit debut record album the rock band Chicago, then known as CTA (Chicago Transit Authority) used what may be a copy of the real audio clip of the crowd chanting, ‘The whole world is watching.’ The track called, ‘Prologue, August 29, 1968’ is 57 seconds long. The chant continues into the next song, track eleven, ‘Someday (August 29, 1968)’ but fades away after a few seconds, only to return again in the middle of the song backed by a haunting piano beat and a ride cymbal courtesy of Robert Lamm and Danny Seraphine respectively. …”
Wikipedia
“The whole world is watching”: Turning points in the ’68 Democratic Convention and the trial of the Chicago Eight (Video)
The Whole World Is Watching: Mass Media in the Making and Unmaking of the New Left, With a New Preface
YouTube: Chicago Convention The Whole World is Watching 1968 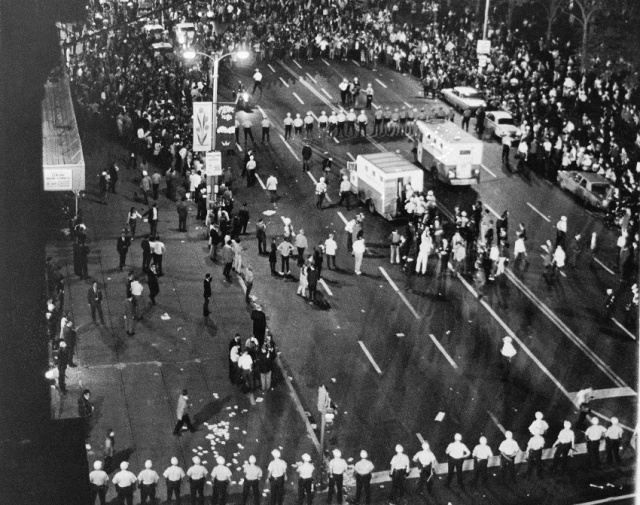 As demonstrators are placed into police vans, Chicago police form a battle line against thousands of others during a melee in Chicago on Aug. 28, 1968. The police are lined up and looking north on Michigan Ave. at the Conrad Hilton hotel, the headquarters for the Democratic National Convention.