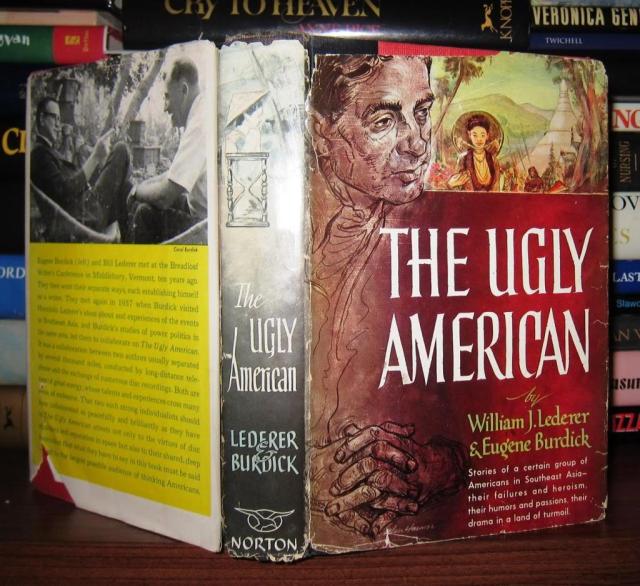 “The Ugly American is a 1958 political novel by Eugene Burdick and William Lederer which depicts the failures of the U.S. diplomatic corps in Southeast Asia. The book caused a sensation in diplomatic circles, and had major political implications. The Peace Corps was established during the Kennedy administration partly as a result of the book. It was one of the biggest bestsellers in the country, has been in print continuously since it appeared and is one of the most politically influential novels in all of American literature. … The book was very much a product of its times and historical context. In 1958 the Cold War was in full force, pitting the two geopolitical giants, the United States and the Soviet Union, against each other for military and geopolitical influence and dominance. … In Asia, the French had left Indochina in 1954 after their defeat at the Battle of Dien Bien Phu and this marked the beginning of U.S. involvement in Vietnam. …”
Wikipedia
NY Times: Still ‘Ugly’ After All These Years
Washington Post: Novel ‘The Ugly American’ blasted policy in Southeast Asia
Salon – The Ugly American’s road trip: Donald Trump and America’s declining culture
Vanity Fair – Donald Trump: The Ugly American* (Video)
amazon
NY Times – ‘The Ugly American’ Opens:Marlon Brando Stars as the U.S. Diplomat (April 1963)
W – The Ugly American (film): “The Ugly American is a 1963 American adventure film directed by George Englund and written by Stewart Stern. It is based on the 1958 novel The Ugly American by Eugene Burdick and William Lederer. The film stars Marlon Brando, Sandra Church, Eiji Okada, Pat Hingle, Judson Pratt and Arthur Hill. The film was released on April 2, 1963, by Universal Pictures. …”
YouTube: The Ugly American (1963, George Englund) – Trailer